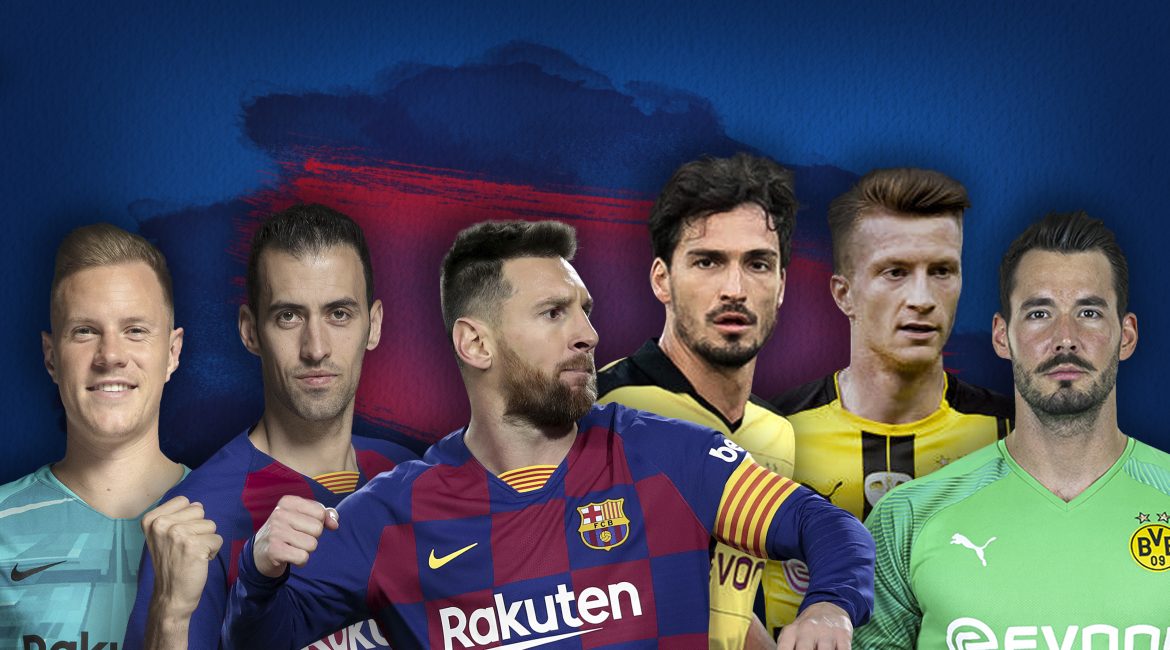 Ahead of the game against the Bundesliga giants, we pick three head-to-head contests that could have a decisive say on Matchday five of the UEFA Champions LeagueSAM MAY06:46PM MONDAY 25 NOVFIRST TEAM 18 hrs agoSHARE ARTICLE

FC Barcelona and Borussia Dortmund go head-to-head on Wednesday night in Group F with kick-off at the Camp Nou at 9.00pm (CET). On the back of the La Liga victory over Leganés, Barça return to Champions League action knowing a win against the Bundesliga side will not only secure a place in the last 16, but clinch top spot in the group.

The blaugranes host the German side for just the second time, the first even meeting coming back in January 8, 1997 which ended in a 2-0 win in the UEFA Super Cup final first leg for Barça on their way to a 3-1 on aggregate. The two teams met in a 0-0 draw in September at the BVB Stadion. Marc-André ter Stegen’s penalty heroics to deny fellow countryman Marco Reus earned Barça a share of the spoils.

Barça are unbeaten in 34 UEFA Champions League home matches, a run that started in September 2013 (W30 D4); the 5-1 defeat of Lyon in last season’s round of 16 second leg eclipsed the previous competition record of 29 set by Bayern Munich, between March 1998 and April 2002.

Here are three key battles to watch out for…

Mats Hummels will most likely be the man to try to tame Barça’s prolific talisman Lionel Messi. The Argentine made a comeback from injury against Lucien Favre’s side earlier in the group stages, replacing the record-breaking Ansu Fati, who made his European bow at the age of just 16 years and 321 days in the match and became Barça’s youngest player ever to feature in the Champions League in doing so.

Ernesto Valverde’s team have scored a total of 31 goals at home this season in all competitions, making it the most difficult of stadiums for defenders. Despite Messi’s injuries at the start of the season, he has netted almost 20% of the total with six goals at Camp Nou.

The Argentine netted in the 2-1 victory away at Slavia Prague in September and became the first player to score in 15 consecutive Champions League seasons. Therefore, the Barça number 10 will be looking to add the name of Borussia Dortmund to his list of goalscoring victims on Wednesday night, and Mats Hummels will be there to try and frustrate the blaugrana striker.

The experienced Borussia Dortmund centre-back has a passing success rate which stands at an impressive 81.8% so far in the Champions League. However, if Barça can put the defender under pressure in his own half then that could lead to chances for the blaugranes, and in particular Leo Messi.

Another interesting battle will be the duel between both shot-stoppers. Marc-André ter Stegen impressed in the first meeting between the sides denying Marco Reus a number of times, most notably from the penalty spot in the goalless draw in Dortmund.

The 27-year-old has five clean sheets to his name so far (23%) in all competitions this season, with two of those coming in the Champions League group stage games against Borussia and Slavai Prague.

Ter Stegen will be wary of the threat Favre’s side pose, and having made a total of 14 saves so far in the competition (3.50 per game), he will be tasked with trying to stop the likes of Reus and Jadon Sancho once again. The German international goalkeeper will at least not have to face his former Barça team mate Paco Alcácer as the striker is sidelined through injury.

Borussia goalkeeper and Swiss international Roman Bürki has to face Messi, Luis Suárez and Antoine Griezmann. The 29-year-old, was rarely tested in the game in Germany two months ago, but with Barça on home turf, he will need to be at his best if he is to shut out Barça’s prolific frontline.

Bürki has conceded a total of four goals in four appearances in the group stages and has four clean sheets to his name currently (22%).

Marco Reus has transformed in recent seasons into a typical ‘ number 10’, switching from the wide areas and his transition has seen him become even more dangerous. The German international is the most experienced player in the Borussia Dortmund attack and could well attract the attention of one Sergio Busquets on Wednesday.

Despite just making two appearances in the Champions League so far due to injury, Reus, has shown his threat, averaging four shots per game and his movement and fast transitions are something which Busquets could be tasked to stop. The 30 year old German caused problems for Barça in the meeting between in the sides in Dortmund and only a great penalty save from his international team mate Ter Stegen kept Reus off the scoresheet.

Reus acts as the linchpin in the middle of Borussia’s favoured 4-2-3-1 formation  and with a pass success rate of 81.3%, controls a lot of their play runs through the German.

Back in the contest in September Ernesto Valverde’s team enjoyed 59% possession at a stadium which is considered one of the most feared in world football. The majority of the play ran through Sergio Busquets and the 31-year-old is key to Barça’s style of play. On Wednesday his defensive role could be vital as he will try to play part in nullifying the threat of Reus.