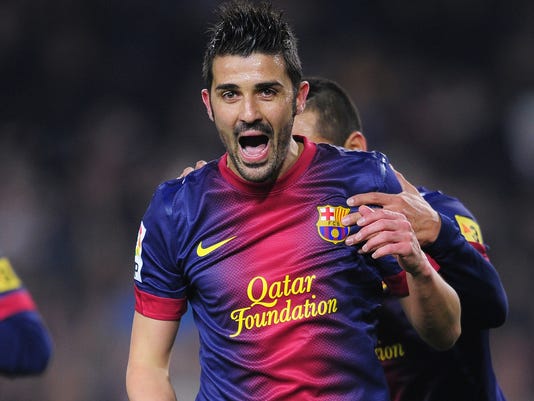 Scorer of 48 goals for Barça says: “I have always said that I would rather leave football before football leaves me”www.fcbarcelona.com11:55AM WEDNESDAY 13 NOVFIRST TEAM 23 hrs agoSHARE ARTICLE

David Villa, currently of Vissel Kobe in Japan and who was at FC Barcelona from 2010 to 2013, has announced his retirement at the end of the season. “I have thought long and hard about the decision and discussed it extensively with my loved ones” said the 37 year old at a press conference in Kobe. “I feel good and think I’ve had a good season with Vissel but I have always said that I would rather leave football before football leaves me. I think this is the perfect time.”

Villa was a goalscorer for Barça in the Champions League final at Wembley in 2011, a wonderful strike that made it 3-1 against Manchester United. In total, he made 119 appearances for the club and scored 48 goals. As he now recalls: “Barça gave me the chance to play for three fantastic seasons at a time when everyone was saying it had the best team in the world. We won a lot of trophies.”

He did indeed. Eight in total, including two leagues, one Champions League, one Copa del Rey and the Club World Cup.

Villa, a product of the Sporting Gijón academy, came to Barça in the same year that he was one of the stars of Spain’s victory at the 2010 World Cup in South Africa. He arrived from Valencia, the club where he spent the longest period as a player.

After Barça he spent a single season at Atlético Madrid, and following a brief period as a guest player at Melbourne City in the A-League he enjoyed four hugely successful years playing for New York City in MLS.

And it’s back in New York where one of his future projects lies, as an investor in a USL Championship expansion team named Queensboro FC.

Here at Barça we wish Villa all the best with his future plans, whether inside or outside of football.