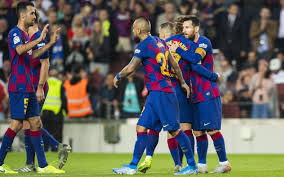 he Champions League returns to the Camp Nou. After a defeat at the Ciutat de València Stadium, focus is back on European competition, as Barça look for the win which will into the next stage. Slavia Prague are the visitors (Tuesday, 6.55pm CET) for the fourth match in the group stage.

Barça come into the match after losing 3-1 at Levante, breaking a streak of seven consecutive wins. Even so, the Blaugrana have not lost in the Champions League this season (a draw and two wins). In fact, they have gone17 games without losing at the Camp Nou in the group stage, and, if they do not lose on Tuesday, they will match their best streak.

The Czech’s beat Baník Ostrava (4-0) in the league, and remain top of the table, with 41 points. In the Champions League, they have one point and they need to win at the Camp Nou in order to have hopes of reaching the next stage.

The only official game between the two teams took place two weeks ago in Prague, where Barça won 2-1 thanks to the goals from Leo Messi and Olayinka’s own goal. Therefore, it will be the first time that Slavia visits the Camp Nou.